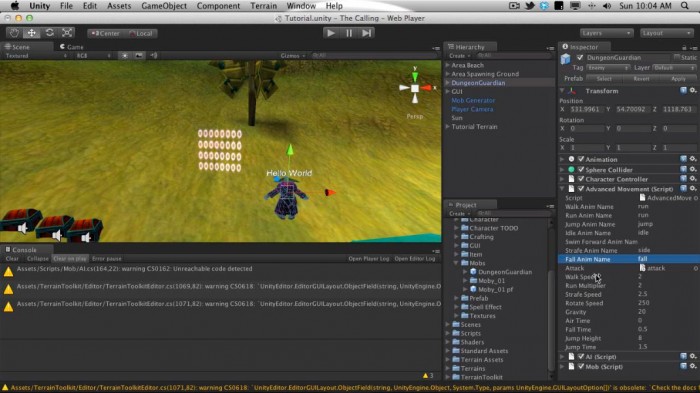 Writting an article about Unity is not something new. This platform is getting more and more popular everyday, and its so for several reasons: its easy for developers to make their games and is several times more powerful that Macromedia Flash, the still king of online games.

Today we’ll offer a detailed review on Unity3D, so that you can see whats good and whats bad on working with Unity3D. This article was based on this developers blog with authorization.

So, to start, its very important to start saying that Android is by far the OS that takes most advantage of the Unity3D technology. Its market reaches more user than the iOS market. Socially is also more effective to launch a game in Unity3D.

There are also certain disavantages. Some of the biggest complains by some developers are, for example, the graphics quality compared to other platforms such as UDK. Its perfectly possible to improve the graphics, but that requires a lot of work at scratch, and not every developer like to spend their time on that or simply aren’t capable of designing as good to reach such quality levels.

The same thing happens to the levels physics. NVidia PhysX is great, no doubt about that, however in terms of features is not as rich as CryEngine for example. Its known that Unity 5 should bring an updated level physics engine, with many more features so we’ll have to wait for that.

Another big con that is not very friendly for beginners is that you either already have a project developed on Unity3D and add details to it to make a sequel or a new game, or you’ll have to start from zero. This is terrible compared to many other tools that already come with templates that allow to just edit everything you need, without having to build the whole core completely.

There is a large number of licenses to improve your experience working on Unity3D, however they aren’t cheap. As a single man team looking forward to make small games for smartphones, some of the licenses are just too much, as their obvious target are the big companies working on to create the next big games market hit.

Building and launching games on portable devices can also have its own disavantages, however there’s one big positive thing about it: if you use Unity free, you can publish on the most popular mobile markets.

In the end, freelancers and small indie teams are the ones that benefit the most with Unity3D. Although the tool offers several solutions and plans for big companies, we believe that there are better platforms to make games and that for small teams, Unity3D is the best there is.